Home / The MountainWorld Blog by Jake Norton / The Right Team

posted by Jake Norton on April 23,2007 in Inspiration 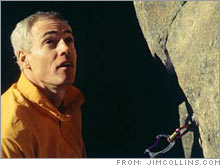 Recently, Fortune Magazine’s online section featured a Q&A with author (and climber) Jim Collins, who penned the great books Built to Last and Good to Great.

The first question to Collins asked what primary advice he would give to a beginning entrepreneur. Collins’ response was both simple and profound:

Starting a company is like scaling an unclimbed face – you don’t know
what the mountain will throw at you, so you must pick the right
partners, who share your values, on whom you can depend, and who can
adapt.

His reply immediately took me back in time 8 years to late-1998 and early-1999 when my friend Eric Simonson asked me to be a part of the 1999 Mallory & Irvine Research Expedition. We knew going into the 1999 expedition that we would need an amazing, cohesive, adaptable team to accomplish our goals. Without the right team, no amount of luck, fortitude, or ability would allow success on the mountain. So, Eric chose his partners based on:

When it was all said and done, we had a spectacular team of Himalayan veterans, all used to dealing with and reacting to the changes inherent in climbing, and who worked well together as members of a team.

Eric’s early team decisions proved instrumental during many phases of the expedition, but especially in our historic discovery of George Mallory on May 1, 1999. Without a cohesive team that worked well together and could adapt to the changes the mountain threw at us on a daily basis, our accomplishments would have been impossible.

It was, as Jim Collins said, the right partners for the goals at hand that made all the difference.

When planning your next Everest, when setting out to reach your next goal, ask yourself some simple questions:

Choosing the right team can very well be the difference between good and great!